Today was a day for all the mama goats and their kids to socialize...so, Goatapoolza Day!


Another week or so and I'll be milking again. Just giving my girls time to bond a bit. I have to use some milk starter for Champagnes babies, but they have a good start.
Lilacs little guys are rough and tough. We banded (castrated) all the males except Lilac's little one, Lenny. All did okay, although Gary and Gerry, Gabby's kids, took it very personally and wailed their little heads off. Gabby got outraged and herded her boys to a corner of the pen and licked them and nuzzled them and nursed them until they calmed down.
I have already gotten calls from people wanting milk, cheese and cajeta. They will have to wait until we get our fill here!
Posted by Lamb at 11:14 PM No comments:

Nola had her babies yesterday.
I had fed her and the other goats an hour before. My son went out and watered everybody.
I checked on all the goats, especially Nola and everyone was fine. Nola showed no signs at all of kidding.
About 30 minutes after I checked, my son took his dog out for a walk...and came right back in:
"Mom, Nola had her babies!"
No warning, no fussing, just went ahead and did her business!
One boy, one girl. We named them Nip and Nora.


Nola had her little ones out in the yard, but after everyone was a bit settled, we moved them into a pen.
So....we have 10 kids!
Posted by Lamb at 6:32 PM 4 comments:

A Little Bit of Down-Sizing...

As the time for us to make the *leap of faith*and move North comes closer, we decided to do a little downsizing.
So, Heloise the goose and Xander the gander, plus the three mallards---Huey, Dewey and Louie--are gone!
We traded them to the feed store for feed.
With a goat population explosion going on, we need the feed more than we need the cash!
Catching the geese was...an experience.
They shared a pen with the ducks (except Daffy). As anyone that has ducks and/or geese can tell you, waterfowl quickly turn their pens into a wet, sodden mess!
So, I was appointed official *catcher*, and my son was appointed *He who holds the feed sack*.
I attempted to catch one of the ducks first, but then Xander flanked me and bit me solidly on MY flank!
OUCH!
So, I caught Xander and shoved him headfirst into the feed sack.
Heloise was much easier.
The ducks were fast and I lost my balance (and whatever remained of my dignity) and fell into the wading pool we gave them for swimming. Still determined, I finally cornered them and got them into separate feed sacks.
I went to take a shower while the Darlin' Man took the birds to the feed store.
He brought back the feed, and I relaxed with a post-shower cup of tea.
*****************************
For those curious, the Darlin' Man did get the railroad job. He hasn't started it yet because he has to go through the railroads training school. He will start that March 17th. Until then, we have to make do on his pension and get everything ready for our big move. Not to mention...buy the house and property!
Yeah...complete chaos here!

Another Goat Heard From...

Lilac surprised us all last night! We had moved her into a temporary pen *just in case*, although we didn't expect her to kid for a day or two yet.
She was checked on every hour, and showed no signs of being about to kid.
Then, without any fanfare or fussing...she kidded!
By the time we got to see the kids, she had already cleaned them up and the wee ones were on their feet! 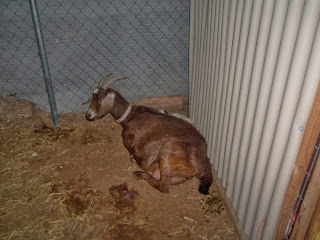 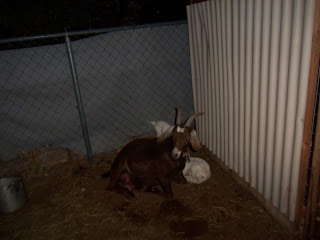 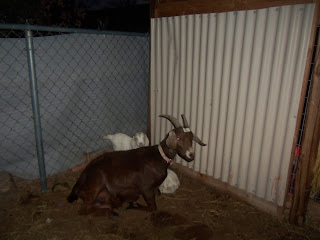 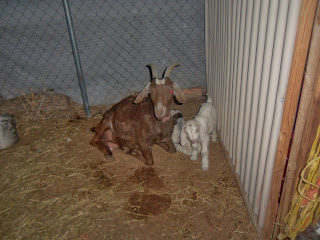 Another set of boy twins. We named them Lenny and Lester. Lenny is the black and white one, Lester the solid white. Healthy and strong. In fact, by this morning, both were bouncing around the little pen and jumping at their mama.
So, the tally sits at 6 boys, 2 girls. So far. We still have Nola as our *lady-in-waiting*.
We only keep the girls to add to our little herd, so what to do with the boys?
Well, we have worked out a deal with a Greek restaurant in town.
But...I am thinking of keeping one male (intact) as a future herd sire. Just....which one?
Lester and Lenny are strong little ones...and that means Lily's bloodline would continue in our herd.
Gabby's twins, Gary and Gerry are simply adorable...and strong, and that would continue Gabby's bloodline. Especially if we decided to not breed her again. She IS getting up there in age and I don't want to risk her health. She is an excellent herd matriarch, so even if she is not being milked and is not producing kids, she is still a valuable goat to have.
And Gabby's boys are soooo cute! 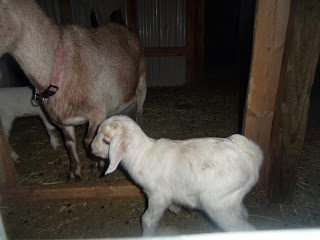 Working on the Night Shift...

So, since Champagne had her quads, we have taken turns checking on the wee ones and their mama to make sure everything is going well. Every hour on the hour.
I get the night shift. 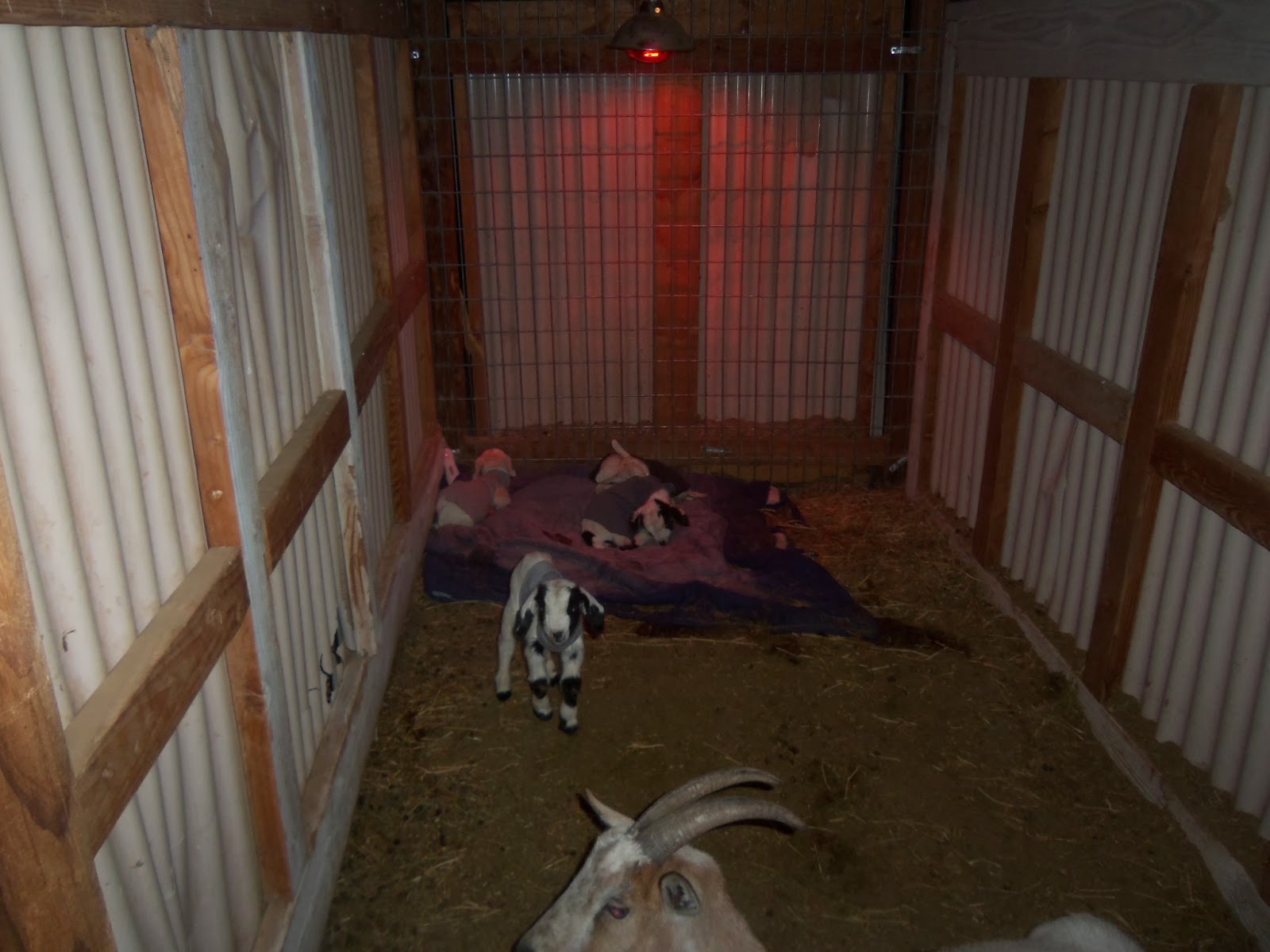 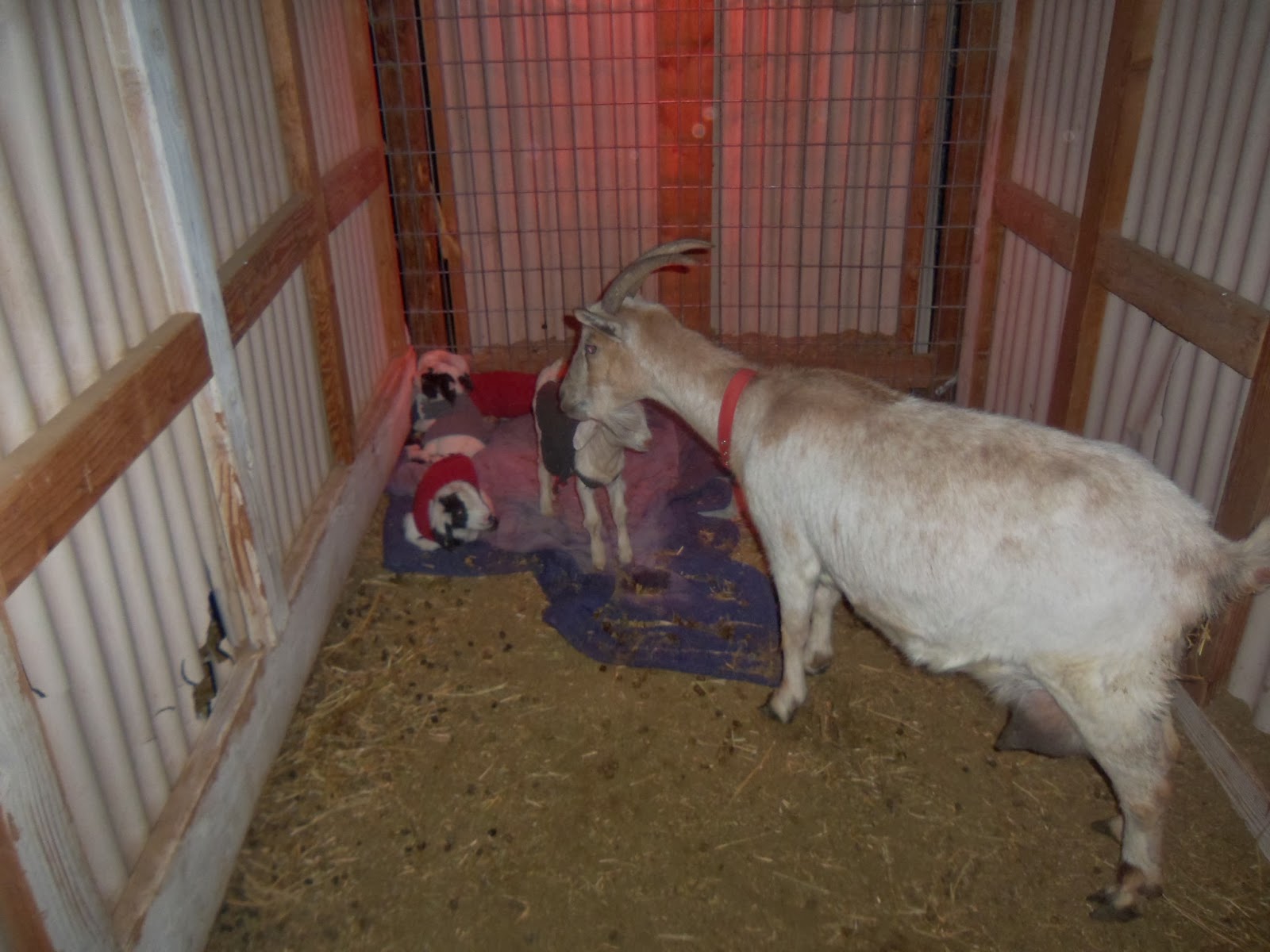 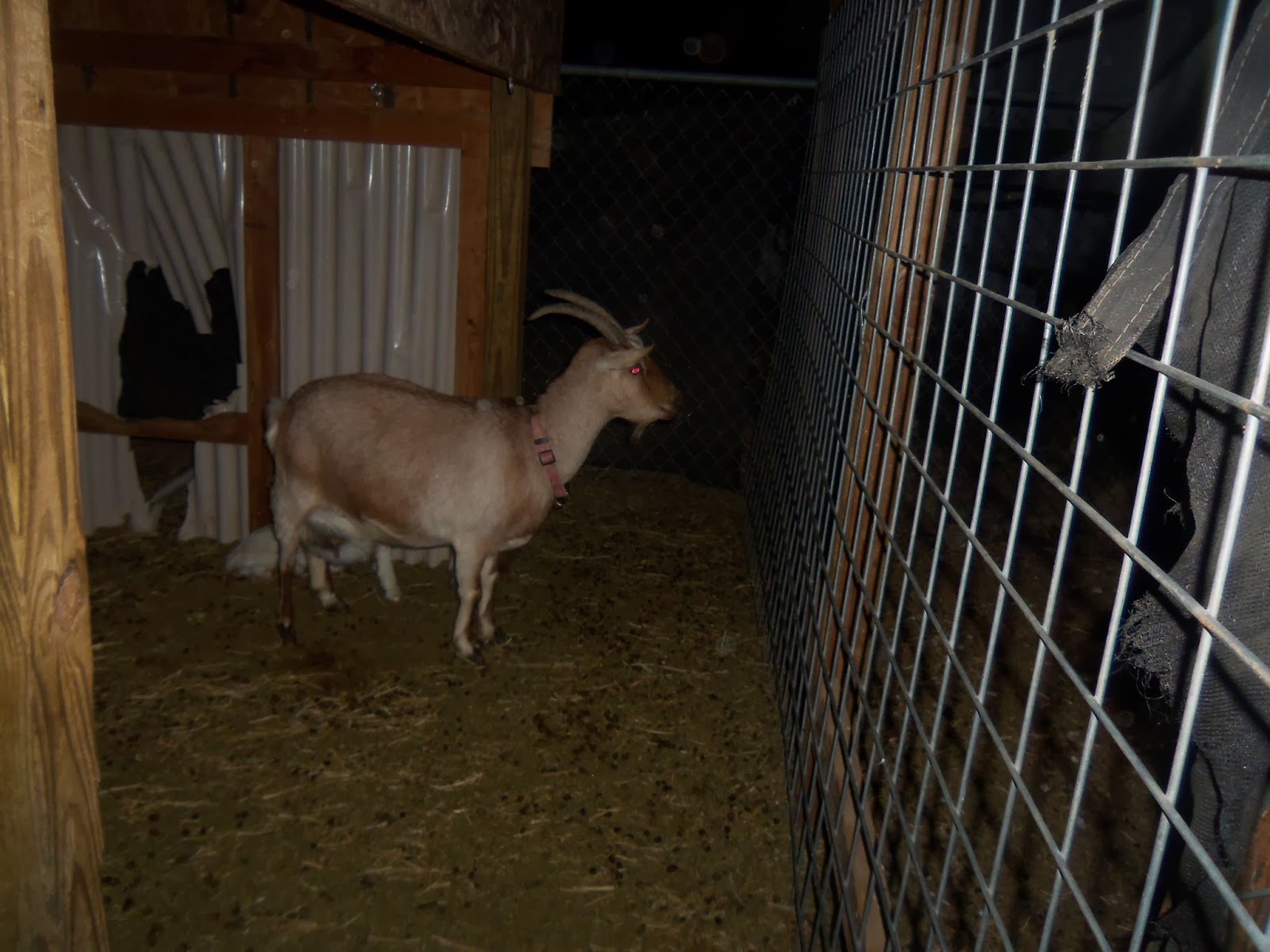 So, thats' how my nights are going!
Posted by Lamb at 5:16 AM No comments:

Champagne kidded today!
First was Charlie, then Clover, THEN Clyde AND THEN Clarabelle!
Yup...QUADRUPLETS!!! 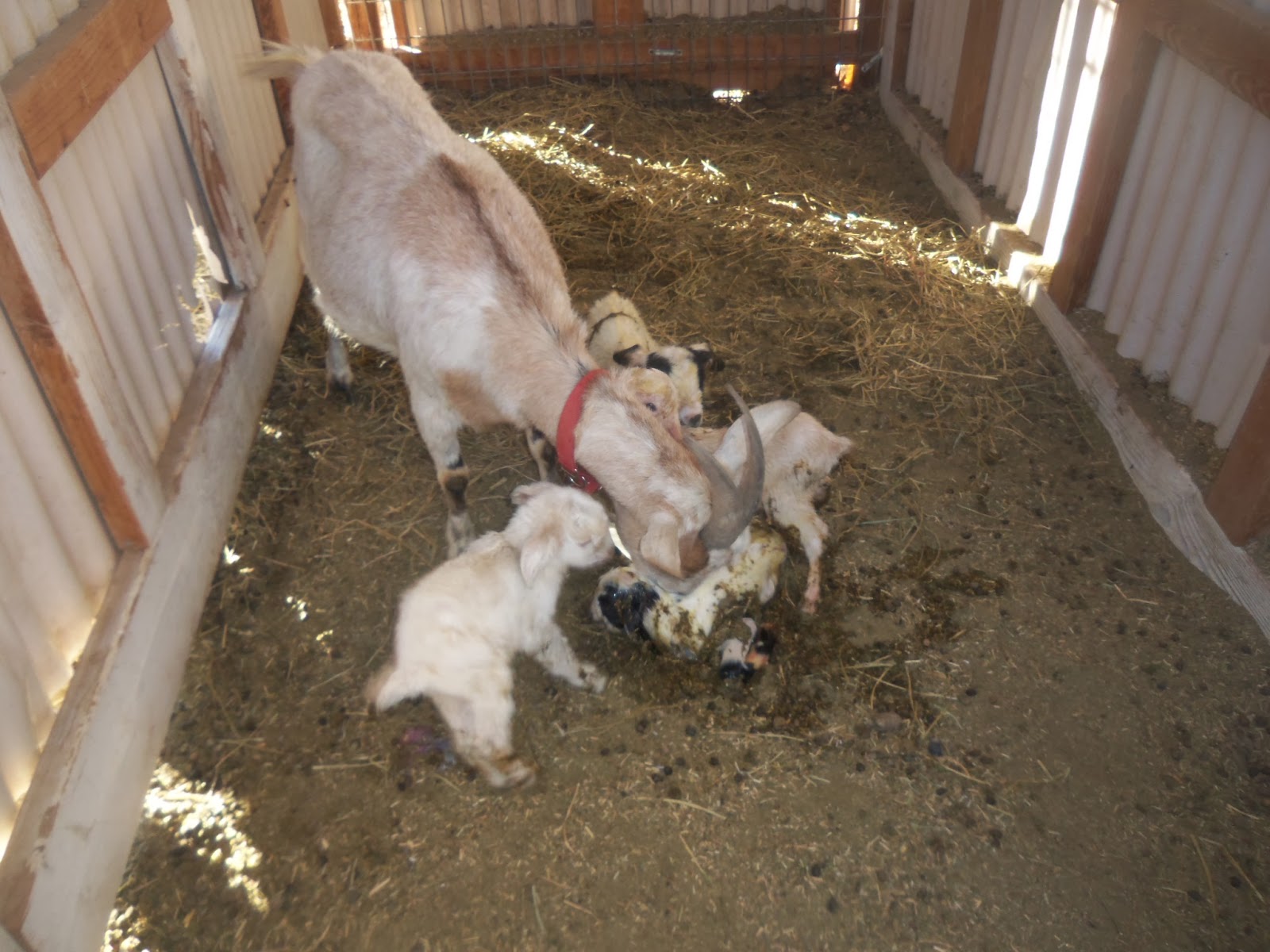 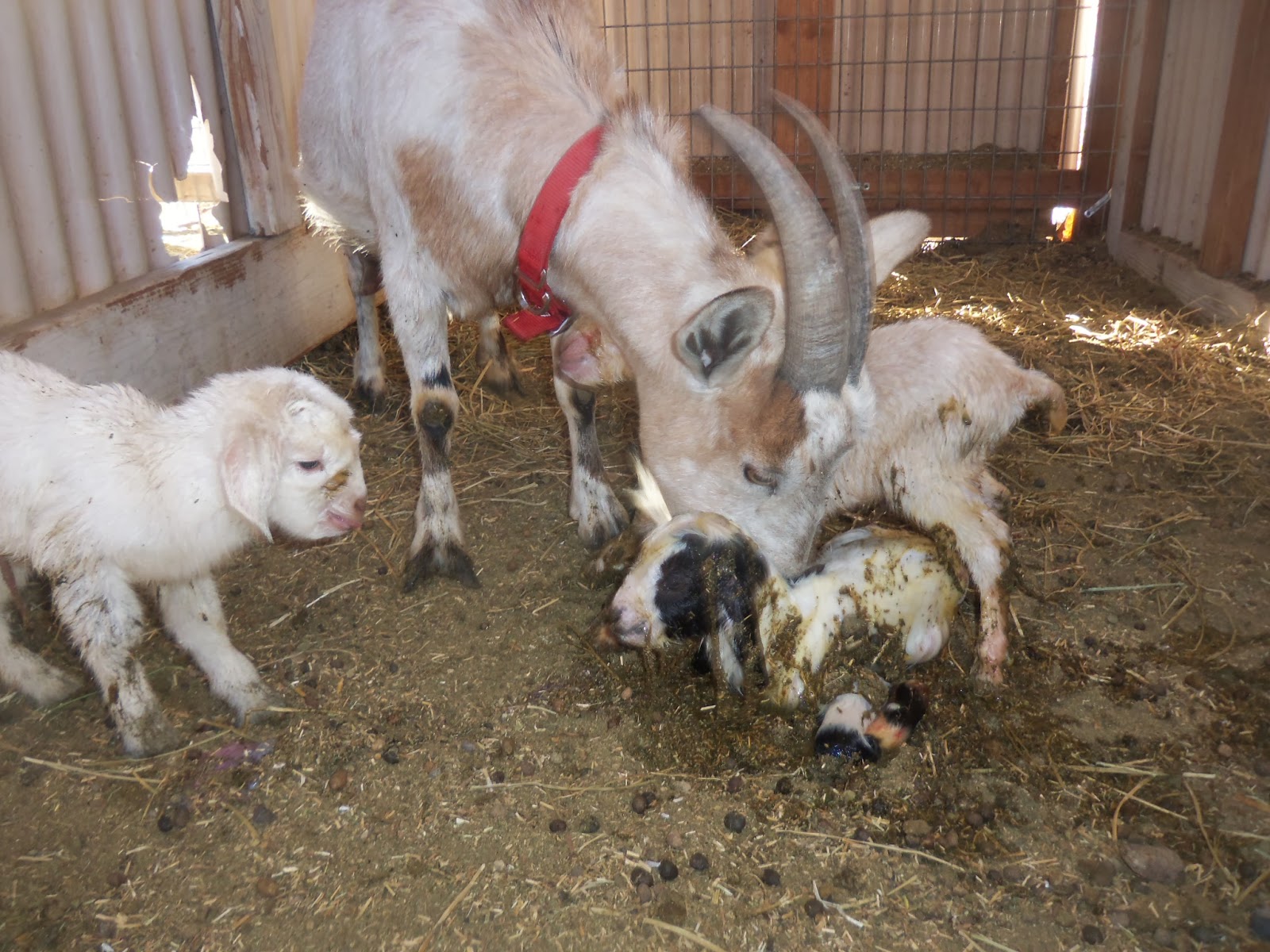 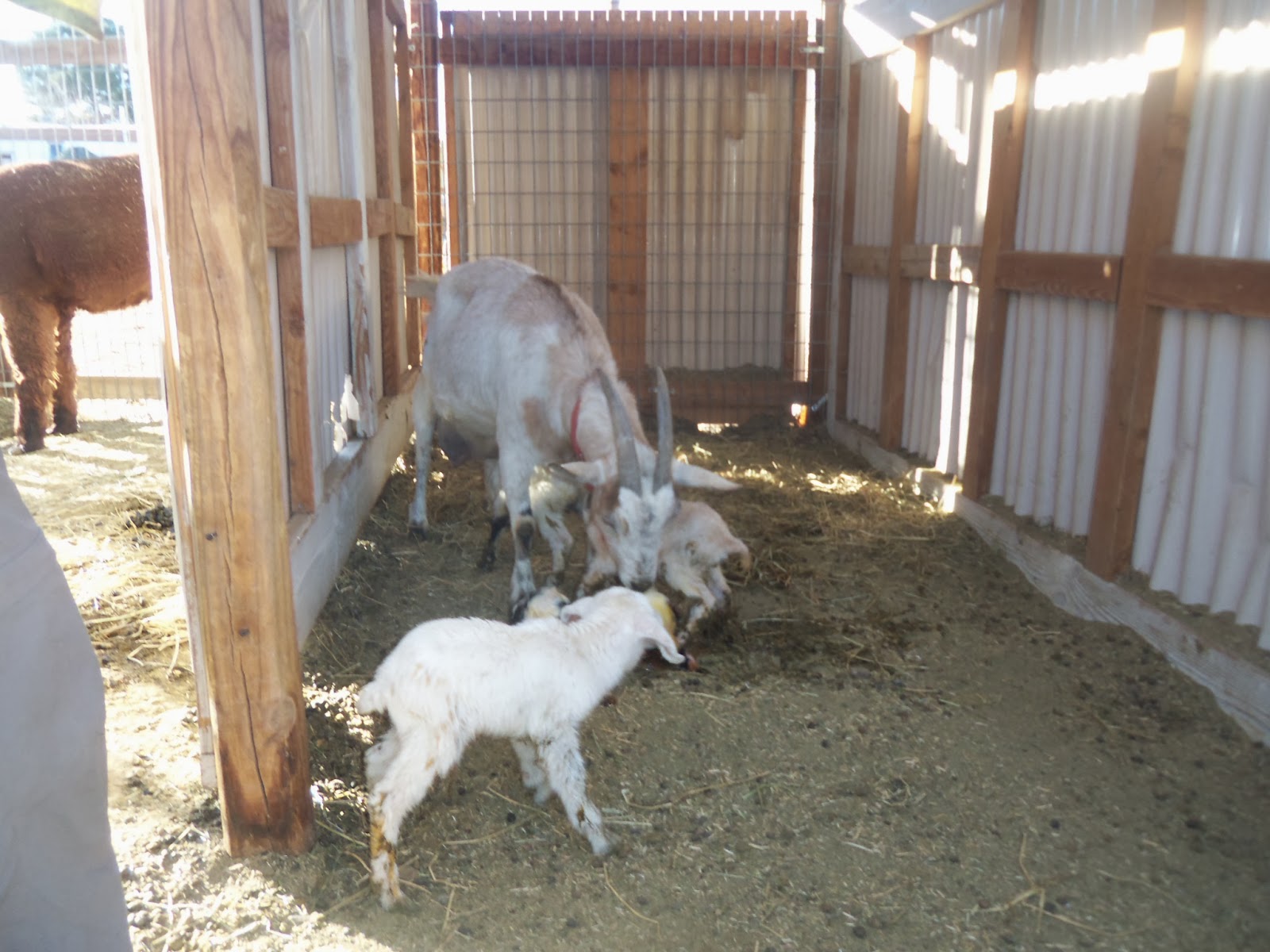 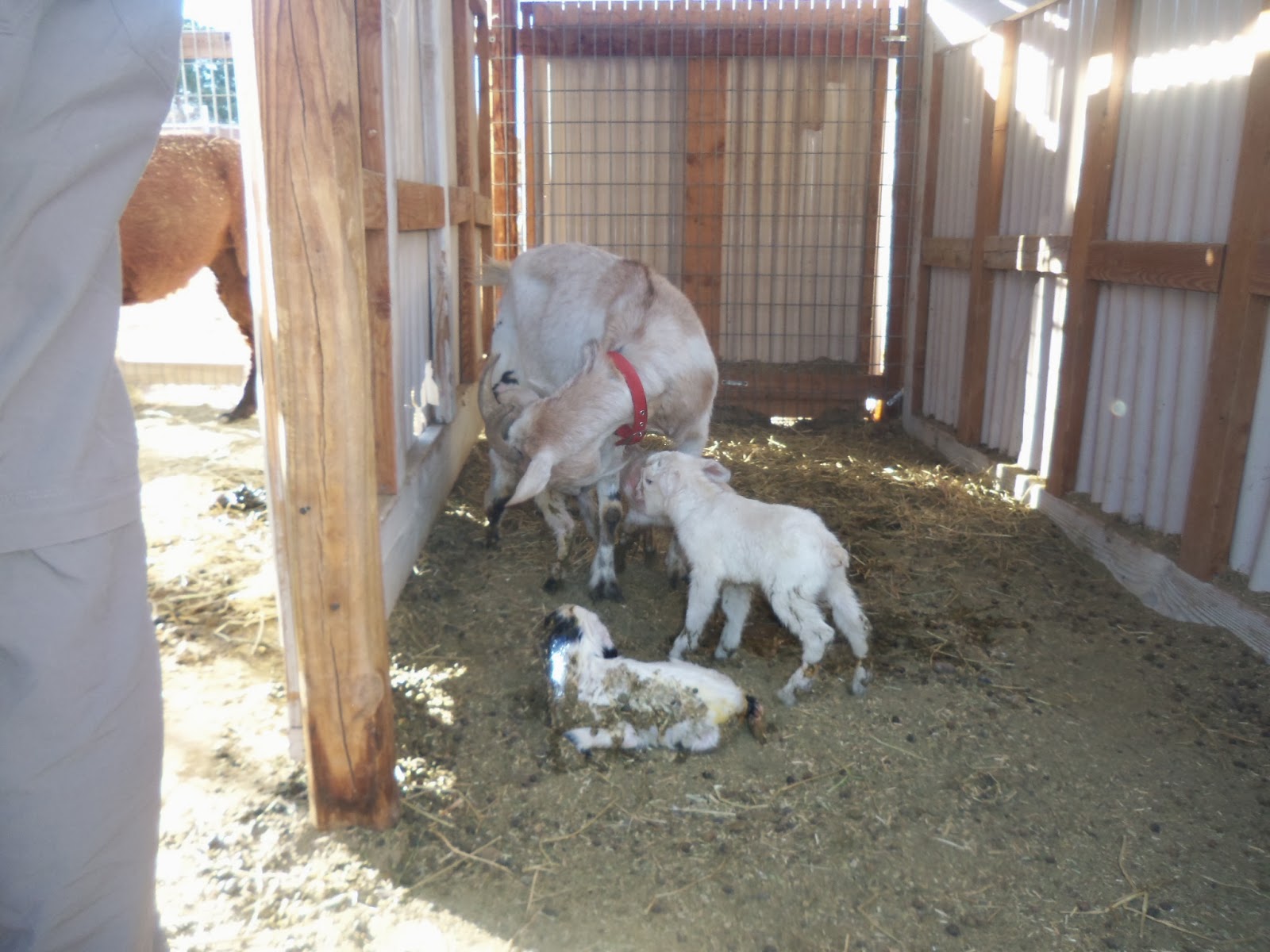 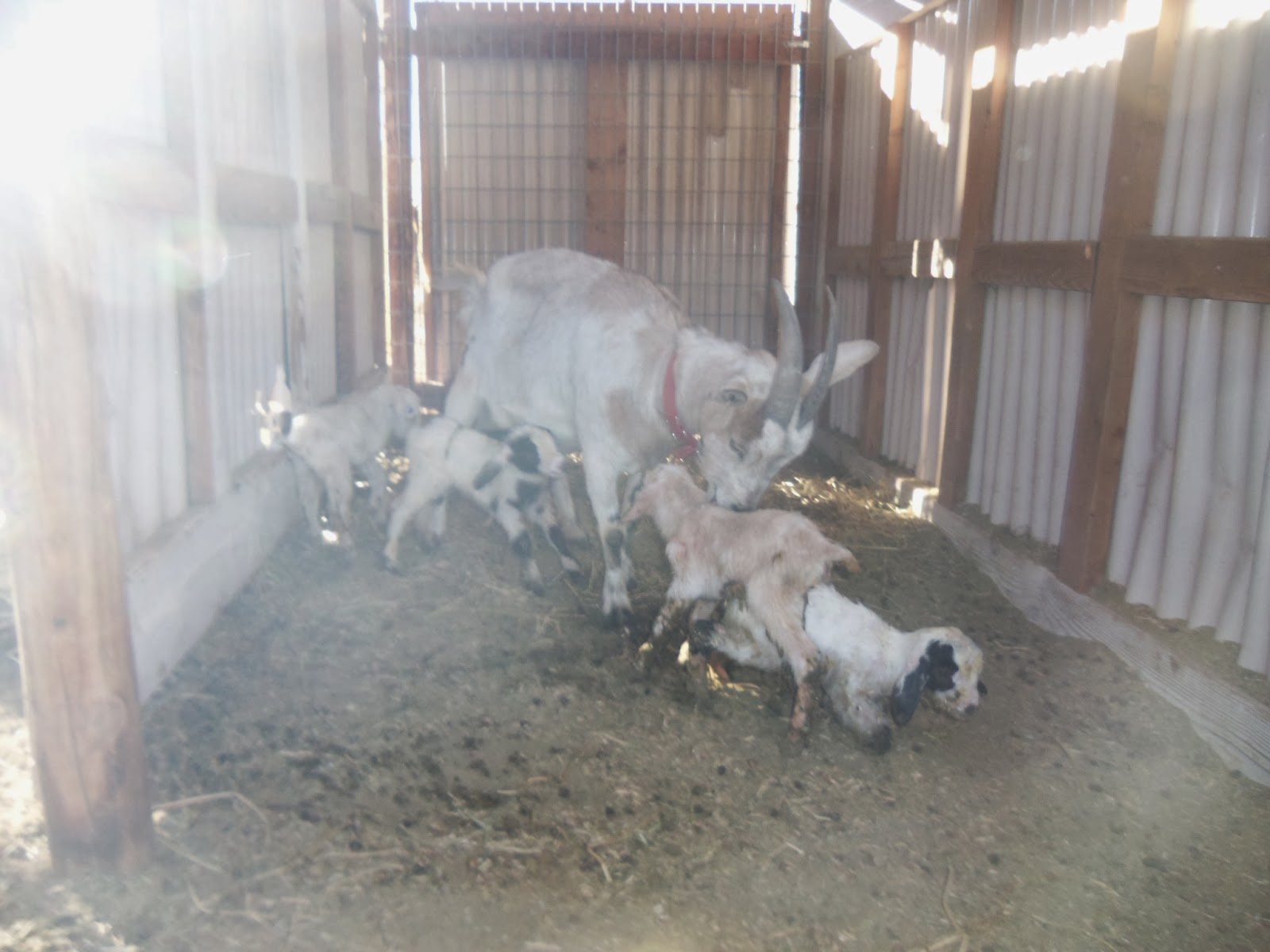 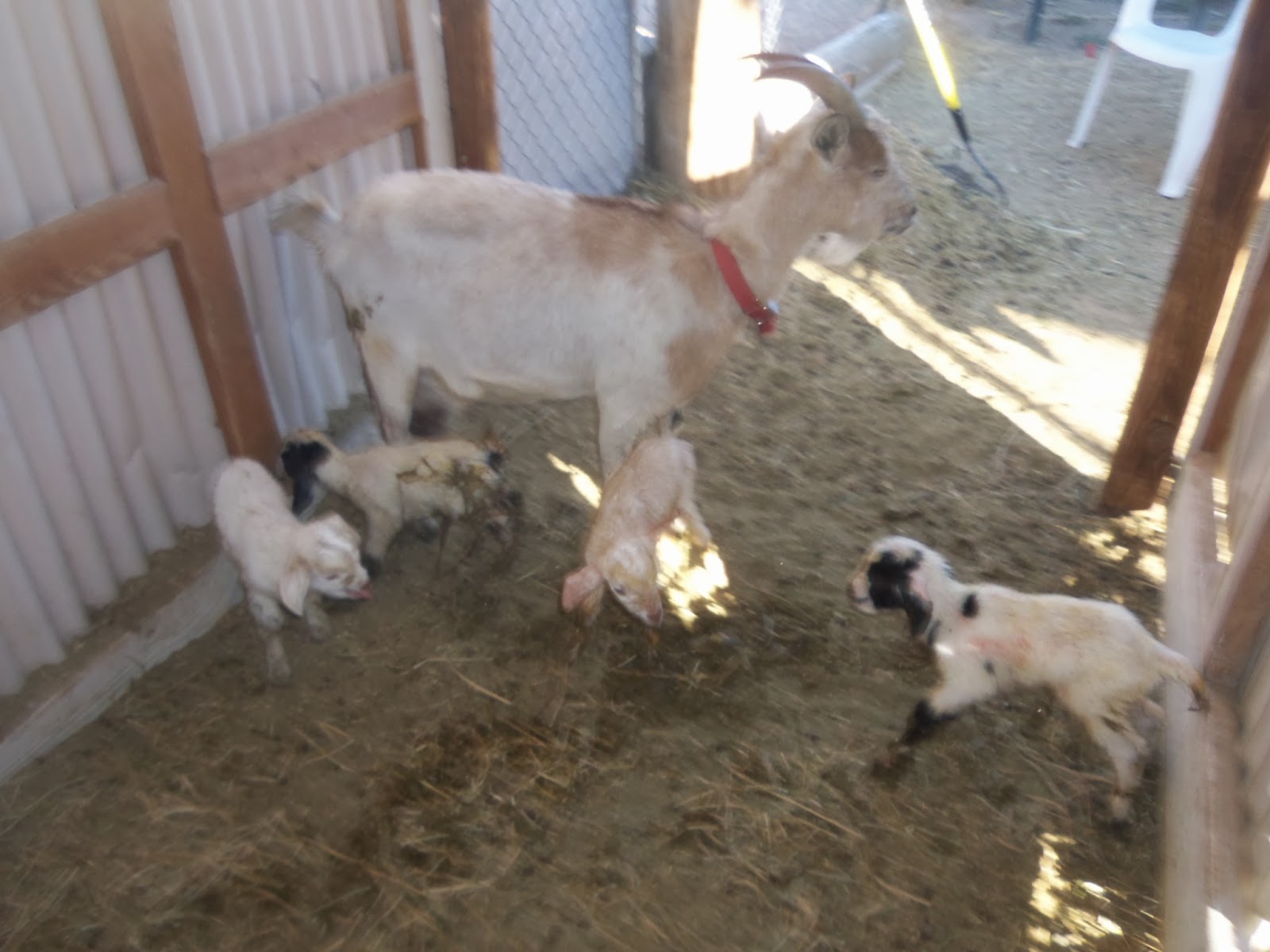 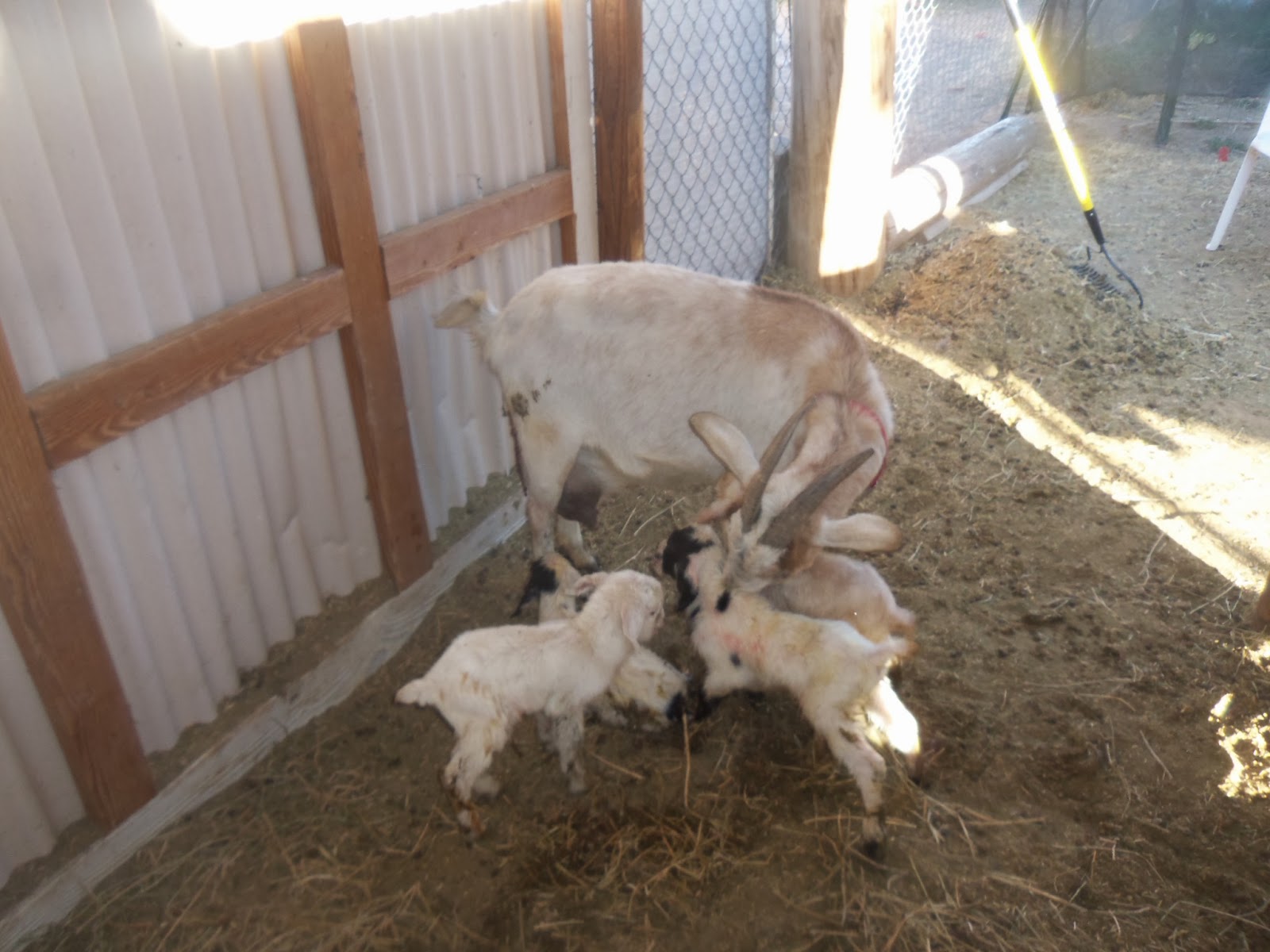 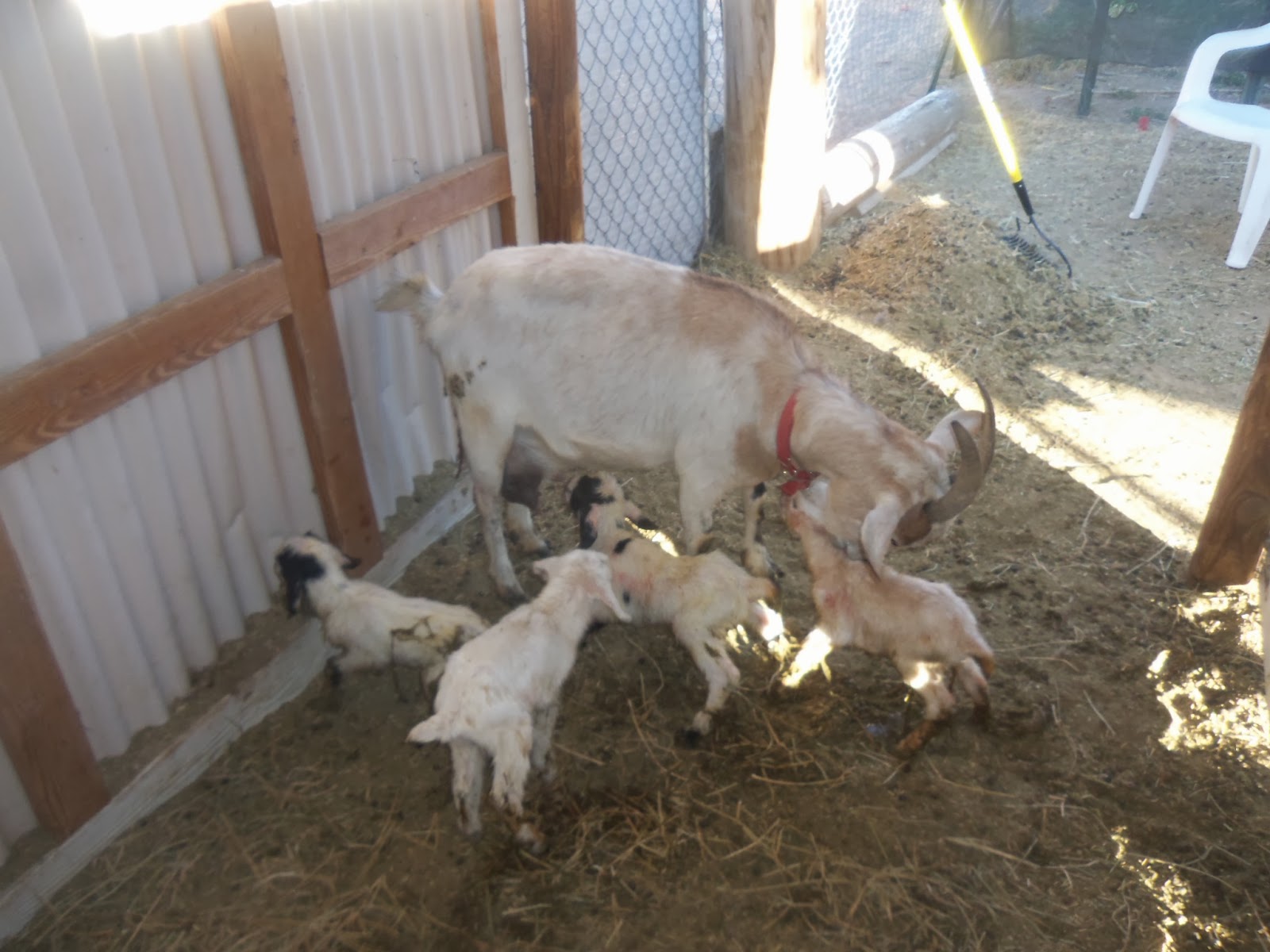 New Kids On The Block!

Gabby was the first one to deliver.
FINALLY!
After weeks of waiting...following my goats around peering at their nether regions, going out in the middle of the night to check them...hell, even ASKING them every morning "Any of you girls gonna kid today"...the reply was always "N-a-a-a-a-a-a-a-a-h"...Gabby had her kids today!
The first one slid out easily, the second one required my assistance, he was so big!
Both boys, unfortunately. But both cute as can be!
Pictures...some birthing grossness--if you are not used to it--plenty of baby goat adorableness!