As I had posted a bit ago, we rented a buck goat to uhmmm....*service* our lady goats.
Henry did his job well and I am assuming that all our girls (except Nikki) are in a family way.
Nikki was far too young, so we kept her confined while the adults...uhmmm....*frolicked* across the back yard.
Henry's favorite was Lily. She was the last doe we presented to him and it was a case of mutual infatuation at first sight. They were inseparable. Yes, he dallied with the otthers, but he always returned to Lily and she was okay with that.
Then, the day came for Henry's owner to come pick him up.
Henry protested LOUDLY when we removed him from the goat pen.
Lily started bleating at the top of her lungs and trying to ram the fence down.
Henry, the gentlest of buck goats, broke free and ran to the pen, bleating at Lily through the fence.
The two nuzzled each other through the fence and bleated at each other.
The owner and I looked at each other.
A decision was made and after a few negotiations, Henry AND Lily were loaded into a horse trailer. Or rather, Henry was loaded on and Lily eagerly followed!
I loved my Lily, but Lily loved her Henry and he, her.
Who am I to stand in the way of true love?
Lily will have Henry and more acreage and a snug goat shed and lots of good food and lots of attention from her new owner. 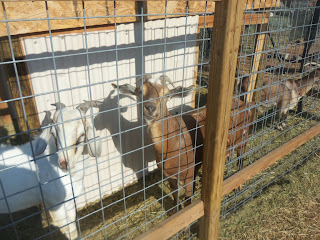 It's been a weird month.
I swear I have written full posts. Witty, engaging, entertaining and informative. Unfortunately, I wrote them all in my head and they never made it to my blog.
So...here's a very abreviated update:
***********************************
My next to youngest son (age 25) has moved in to help us get ready for the Big Move North. We are also helping him as he lost his job in Virginia.
We lost 3 animals; Perfection the peachick, and two chickens. 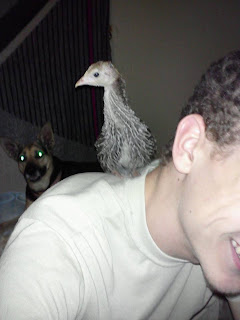 We will miss Perfection. We buried him out in the yard. I found a shoebox and lined it with fabric and we tucked in some peacock feathers ...so he could go to rest with the tail he never had a chance to grow himself.
We are not sure what he died of, but we suspect he ate something that caused him to die.

Our turkeys hatched a chick and we removed the chick and put it in a private coop (the old bunny hutch).
Named it Sammy as we figured that name was good for a girl or a boy. So far, so good.

Our rent-a-goat is doing his job well. I think all the does may have caught. We have him until the middle of the month, so we will rotate him among the girls until his owner picks him up.


The Darlin' Mans retirement plans are stumbling forward. He takes leave Nov. 1st. At that point he will head to Vt and NH to find a house, buy the house and get basic arrangements done for the move.
We have found a good real estate agent in the area and are fine tuning our search for property.

It has been unusually wet the past few weeks. Lots of rain and thunder. The ducks and geese love it, the chickens and goats......not so much.

The alpacas are doing fine. Alberto has been doing a lot of humming to his ladies, but hasn't been trying to mount them. We *think* Alice and Ana are pregnant, but need to get a vet out here to check.

Been *paring down* stuff here. You never realize how much stuff you have that is basically unneeded until you have a move coming soon!