Let's Bring Everyone Up To Date...

What a month! Everything that could happen has happened!
Lost 2 alpacas, one rooster.
Okay...I can deal with that. It sucks, but I can deal.
**********
Then...a car wreck. Some idiot passed me on a double yellow line as I was in the middle of a turn into my driveway and ripped off my bumper, bent my tie rod and various other small damages.
So, been dealing with that and the insurance company, etc.
Okay....
**********
A cousin of the Darlin' Man passed away the start of the month. He was only 49, but he had abused drugs and alcohol from a young age. He died of cirrhosis.
**********
Then last Friday my Uncle George died. He was 88, he and his wife had been married 67 years, almost 68.
Uncle George was the last of his generation in our family. He out-lived all of his siblings. And was the longest lived of any of the men in his family as long back as we can trace! He had a long life and, according to those who were there, seemed "ready to go". He asked to be helped with a bath, saying; "I need to be clean, I'm not going dirty!", got his pajamas on, laid down in bed, sighed and was gone. A peaceful passing.
**********
Then yesterday, the Darlin' Mans son called to announce the birth of his first, a boy. 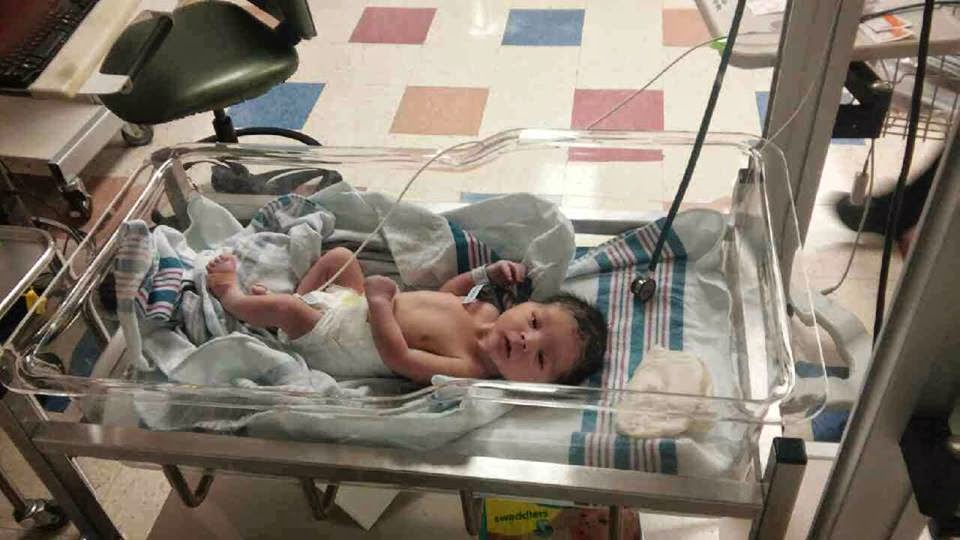 The Darlin' Man is now a Grandpa!
The Darlin' Man will be going down there this weekend to meet his new grandson.
Life goes on!
**********
The past couple of days were vicious cold, but today we will be in the 30s, tomorrow in the 40s (YAY!!!).
Spring comes...a little later than most folks out there, but Spring does arrive nonetheless.
**********
This morning:

I read other blogs....all over the internet.
Many are about preparedness. Some are more of a survivalist bent. And cooking/food blogs. And news blogs. History web sites.Paranormal web sites. Nature web sites. Farming web sites. And on and on.... I read a lot, lol!
Recently have been reading some of the survivalist blogs out there...you know,*Doom and Gloom*type blogs who, in past years would discuss and pick apart the various calibers of ammunition, firearms,etc. or showed you how to make your own generator out of parts you could find at your local dump. Kinda edgy and gritty blogs.
Anyway....started reading about climate change the other day. That led to some of the gloom and doom guys....only some are not about survival anymore. They don't believe we, as a species, can survive.
Case in point: http://survivalacres.com/blog/   and  http://guymcpherson.com/ .
So....species extinction. Why have a garden then ? Why store food? Or learn to shoot? Why prep at all if we are all going to burn up or starve or whatever?
Yes,the planet may warm up. Yes, we will have innumerable challenges to face, adaptations to make.
But we can and will adapt. Plants adapt, animals adapt. And humans adapt best of all.
But here's the bottom of the truth that everyone out there should remember:
The planet adapts.
If the temperature goes up, that will cause a slowing of the  North Atlantic Gyre ( http://en.wikipedia.org/wiki/North_Atlantic_Gyre ) and, in all probability, the other 4 major ocean gyres (currents like the Gulf Stream). These currents slow and the climate cools. Perhaps a little, perhaps enough to balance or, perhaps too much and we'll find ourselves in a new Ice Age.
The planet will change, perhaps drastically. Most of us will not be here to see it. Not even our children, depending on the speed of these things happening.
So why prepare?
Because in the here and now things happen. You can lose your job, there could be a hurricane, a riot that spills over into your suburb, a new *Spanish flu*, any or all of these things can happen.
Being prepared is a hedge against all these.
When the hurricane hits and you have no supplies for your family do you think telling them "Oh well, in 100 years the planet will be so hot it will kill everyone anyway" will comfort them, fill their stomachs, slake their thirst?
As for climate change, global weirding, whatever you want to call it....yes, prepare for the storms. Prepare for chaos. Prepare for higher prices at the grocery store (drought in California),  higher prices for damn near everything (transport costs going up!), new infectious diseases, etc.....
I don't worry about 100 years from now, I worry about next week or next month.

Well, Cab, our beautiful, docile Spanish rooster, is gone. No sign of illness...then one night he seemed to have a small case of the sniffles. Within 24 hours he was dead.
...sigh....
********************
It has finally started to warm up. Thank goodness!
I can look forward to Spring. I have missed Spring so much the past few years.
We didn't really have Spring in El Paso...mainly because we never had Winter. Oh, maybe a few weeks of colder temperatures, but not what I consider a real Winter.
I want to watch the process of Winter loosening it's grip and Spring embracing the countryside.
I want to watch the river thaw and fat buds on the trees unfurl into small green leaves.
I want to smell Spring. The loamy soil thawing, soft Spring rain, the woods greening up.
It has been way too long.
Hoping everyone out there is looking forward to Spring as well!
Posted by Lamb at 5:55 AM 1 comment:

The Good, the Bad and the Utterly Depressing

Well, we made it through February.
The coldest February in New Hampshire in 145 years, so the papers tell me.
It got pretty bad some nights here. -30 and lower is nothing to laugh at.
Good thing is, it is starting to thaw a bit during the day. Roads are clear. Of course, New Hampshire is amazing at cleaning the roads, even during snowstorms. Southern New Hampshire got it much worse than we did. Roofs collapsing all over Manchester and Concord. Schools, malls, homes, etc.

We lost Beatrice and then, the start of last week we went out to feed and found Alberto, our mature male alpaca, dead in one of the stalls. No clue what happened.
So, we got some better feed and more hay and have been coddling the rest of the livestock as best we can.
I am getting depressed about raising livestock. Just seems like bringing them up here maybe wasn't the best idea. I hope we don't lose any more. I just don't think I could handle it.

I am starting seeds this weekend. I'll post which ones and how much. I am hoping to use raised beds IF I can get the lumber real damn quick. In the meantime, today I'll be putting potting soil in all the little seed pots I made out of  2 liter bottles and milk jugs. Also, making some manure tea to water my little seed pots with.

I hope everyone out there is anticipating spring as much as I am!
Posted by Lamb at 12:32 PM 6 comments: