Happy New Year to all of you!

To be a happier person:

Take care of yourself:

Christmas on the Cheap

We scaled back holiday celebrations here. With the Darlin' Man scampering about the country trying to get everything done for his physical, etc. for the new job, we just kept it very simple.
Trees are expensive here, and, we tossed out the old plastic one after last year because it was so bedraggled.
So, our tree: 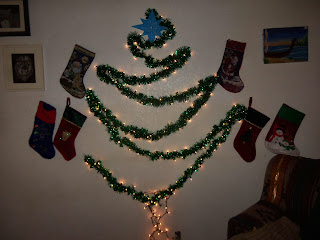 Our tree with the presents under it: 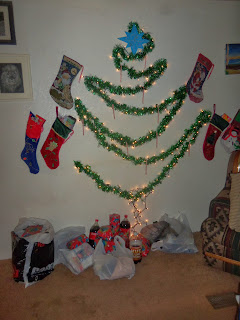 I didn't buy any wrapping paper. So, I used what we already had (Batman Christmas wrapping paper, lol!) Or presents were sorta concealed in shopping bags we already had laying around!
Everyone got needed items...a lot of socks and underwear. A knife for one, a small coffee maker for another, a used video game for another. Soda and special candies for the guys. Each dog got a new chewy bone.
**********************
Here's a couple of new pics of Angus. He is so adorable and I am handling him every day....even though his mama gets upset. 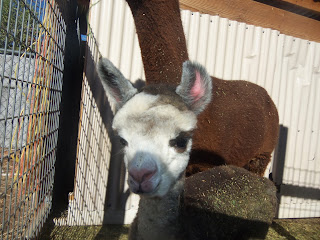 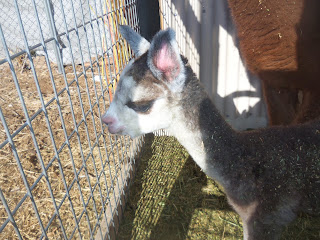 So...We Have These Pregnant Animals.....

My days and nights have been busy watching over 5 pregnant goats and 2 pregnant alpacas.
First, the alpacas.
Ana gave birth about a week ago, but unfortunately her little cria (baby alpaca) died after only a few minutes. We have no idea what wrong.
Yesterday, I checked on Alice and all was well, everything calm.
A scant fifteen minutes later, my son went out to change the ducks water and SURPRISE!, Alice had a wee one! We quickly transferred her to our *nursery* pen with the wee one. My son had to carry the little one and we determined it is a male!
Say hello to ANGUS! 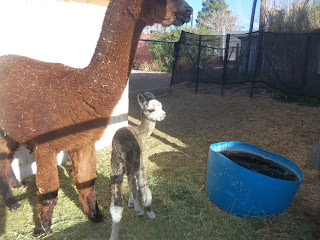 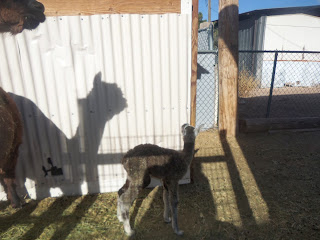 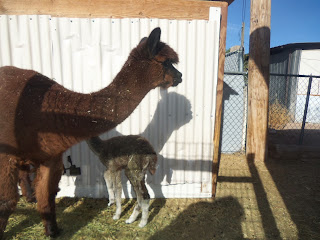 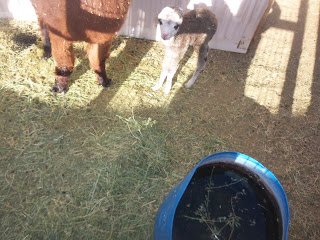 Is he not the cutest thing on four legs? I love his coloring. I know, solid white fleece brings the best price, but I think he looks so adorable!
Mama Alice and baby Angus doing well so far!
*********************************
Remember our hand raised duck, Daffy?
We assumed Daffy was a boy. Well, a couple of weeks ago she presented us with an egg...then another, then another!
That's MISS Daffy, thankyouverymuch!
She has a private pen and a private wading pool, so obviously, her eggs are not fertile. We have tried to put a drake in there with her, but she chases them out. However, when my son goes out to her pen, she makes lovey-dovey eyes at him and preens herself and then tries to cuddle up to him.
Imprint much?
Don't know how we are going to solve this little problem!
*********************************
The Darlin' Man's son got his Drivers License....YAY! That means that I no longer have to do the bulk of the driving around here. What a relief!
*********************************
Speaking of the Darlin' Man...he kept sending out those job applications, day after day, just hoping to get an interview for his *dream job* working for the railroad.
FINALLY, CSX called! But the interview was in Indiana! So, for his Christmas present, we agreed he would go to the interview. He went by bus and had to get a motel room (financial bite we were NOT expecting right now!) The interview went well.....very well! As soon as he passes the medical exam, he is hired! They offered him a job contract that he readily accepted. After the medical exam he will be given a date to report for training at their school in Atlanta. We are soooo happy! Yes, it means he will have to work away from home for a bit, but the pay/insurance/other benefits are so good we couldn't pass it up.
********************************
Onto our move and all that. We plan to buy the house through an LLC  that we are currently forming. As soon as the LLC is registered and we have locked in everything, we will be buying the house in New Hampshire and moving. So....YAY!!!!!!! We have all the paperwork started, so it is a matter of waiting now.
********************************
The goats are stubbornly refusing to kid. I think Champagne will be first, followed closely by Nola, then Lilac and Gabby and lastly, Nikki.
Going to be a wild and wacky Holiday season here, considering all the does will kid within a 2 week period (I think).
*******************************
Hope you and yours are having a fun Yuletide season!
Posted by Lamb at 5:04 PM 7 comments:

Well, the Darlin' Man apparently brought one last gift home from retirement.
Some sort of vicious soul-sucking virus that has attacked all of us without mercy.
Take all the symptoms of the worst virus you have ever heard of.
Multiply them by ten.
Yep...that's what we have.
The Darlin' Man got hit the day after Thanksgiving. One of my sons got hit that night, The Boy got hit later that night...and the rest of us tumbled like dominos.
It started with the victim throwing up with no warning. No nausea, no fever, nothing.
After that, the symptoms got progressively worse.
Fever, massive headache, joint pains from the ninth level of hell, stomach cramps, diarrhea, dizziness...all the worst of the worst I have ever felt.
I have been treated to the lovely extra bonus of a head cold and chest congestion to go with the above ills.
I made a new batch of elderberry syrup stuff this morning.
I have also started mega-dosing with Vitamin C.
I am dragging myself around the house trying to sanitize/disinfect every inch of this place.
I am tossing out the leftovers of our Thanksgiving dinner (wince) and cleaning down the refrigerator within an inch of it's life.
Even the dogs are going to get baths!
I put clean sheets on everyone's beds this morning and started washing all the sheets and towels in the hottest water I can. Fortunately the day is warmish and the sun is bright, so I am line drying everything.
Yeah...going overkill on this. I hate being sick!
Hopefully, this will help.
I hope so...there are five of us and only two bathrooms!