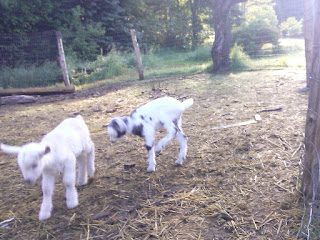 Been so busy! But here are Champagnes lovely twins.
Not sure about the names as of yet. The fawn colored one is a boy, the white and black one is the girl.
I am thinking Dolly for the girl...not sure about the boy. Gotta start with a *D* though. Still not sure about *Dolly*, so if you think of girls names, let me know.
Accepting all ideas, lol! (And we already have a *Daisy*)
Posted by Lamb at 9:18 PM 4 comments:

The news this past month has been....so weird.
Bruce Jenner becomes Caitlyn Jenner.
People claim they are *Trans-abled* (perfectly healthy humans that *feel* they are a handicapped person living in a healthy persons body). Some go as far as to stage accidents to become handicapped...severing limbs, blinding themselves, whatever. They say it makes them more comfortable in their bodies.
And, of course, the *Trans-racial* broad up in Spokane that says she *feels* she is Black. 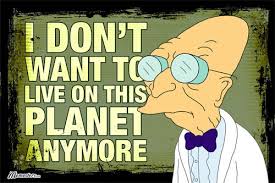 What the hell is wrong with people these days?

Lets tackle Bruce/Caitlyn first.
Since Christine Jorgenson came back from Denmark a changed....uhm...woman, there has been much debate about trans-genderism. The first *transition* surgeries were actually done in the 1920s and 30s, btw.
Bruce/Caitlyn is a full grown adult, able to make his/her decisions and pay for whatever procedures are necessary. I actually have no issue with this.(Besides, if I had been a man married to Kris Jenner...well, I kinda would have wanted to get rid of my man-junk anyway.)

What I am having an issue with are the many stories I have been seeing---for the past couple of years--about parents raising their kids as the opposite gender because the child *self identifies* as that gender. Kids as young as THREE according to articles I have read.
Look, at age three one of my boys said he wanted to be a fish when he grew up. (He loved swimming) I didn't park a big aquarium in his room for him to sleep in and buy him a mermaid tail! I calmly explained to him that people do not grow up to be fishes and told him about cool stuff he could be...like maybe a deep sea diver or a marine biologist. He threw a couple of tantrums, but he got over it and later decided he wanted to be an astronaut...or a pizza delivery guy. Kids are like that!
A little boy might want to wear a tutu one day and overalls the next. Same for a little girl. A girl might say "I feel like being a boy today!"  Should you hurry off to a shrink and repaint her room blue, give her a buzz cut and toss out her dresses? No. Go with the flow for that day. If it is something that continues over and over, then take the kid to a medical doctor first.
Nature is weird. Nature gets mixed up at times. Babies have been born with male genitalia and ovaries. Some babies have been born with no external genitalia. Or both male and female genitalia. It's startling, but it happens. It has been reported as far back as the history record goes.
If the kid passes a thorough medical exam and still insists they are the opposite gender, explain to them the set of genitalia they were born with generally means they are of that gender. Get them to a good shrink and evaluate from there.
But I don't think they should use the school bathroom or locker room of the gender they *identify* with. That is so not fair to the kids that are perfectly happy with whatever gender they are.
Jeans and tees are acceptable clothes for either gender, so don't buy a whole gender related wardrobe.
When the kid hits puberty, get their hormones tested. Someone can be physically male, but hormonally female (or vice-versa). A brain MRI can be useful as well, as studies have shown male and female brains are different.
But please, don't be whipping out scalpels and the like until the kid is at least 18. I would actually suggest age 23 to make sure the skeletal growth has stopped. Same for hormones. None until age 21.
So...that's my take on that.
*************
On to the *Trans-abled*.
As the mother of a handicapped child, about all I can say is : Really? REALLY!?
To want to amputate your legs or blind yourself, whatever, is a sign you are in the throes of a serious mental illness. You need help and lots of it.
Perhaps these people could be paired with a seriously handicapped person and have to take care of them for a month or two.
If they deliberately handicap themselves, they should not receive any sort of disability checks.
So...that's my take on that.
**************
On to head of the NAACP in Spokane Washington and also the professor of African studies at Eastern Washington University....that *self identifies* as Black and says she is *trans-racial*.
Liberals heads all over the country are imploding.
They can't criticize her because that would be *trans-racist*, but they can't condone her *cultural appropriation*.
The NAACP can't fire her, because that would be racist. But she lied on her job application, so they are stuck with a liar.
The university is stuck in the same situation as the liberals and NAACP.
Such fun to watch.
I say arrest her for fraud.
Think about it...she went to college with grants and loans designated by Affirmative Action for a minority student. She went to Howard, which is a traditional Black university, but she lied about her race to get in.
She lied on all her job applications....and I am sure the university where she works goes by affirmative action guidelines, so she probably got a boost there.
Somewhere out there is a minority student that didn't into Howard....because of her.
Somewhere out there is a minority student that didn't get a grant or a loan...because of her.
Some other professor should have her job. Some other civil activist should be the head of the NAACP, Spokane office.
The only good thing abut her , besides causing liberals heads to implode ....she and girls from the Jersey shore are keeping the bronzer people in business!
Hmmm...maybe I can be *trans-racial*, too. But I want to *self identify* as a hot Asian chick. Lucy Liu maybe?

Recently it seems that full grown  adults on the internet, and in particular, on blogger, have been behaving like rude children.
They go to one anothers'  blogs, make rude remarks....shots across the bow, so to speak, then get all butt hurt when they get a shot across their bow.
Then there are blog posts or sniping in comments, etc. These are NOT kids. They are 50+ !!!
Then over to other blogs to draw others in.
Children, please!

I like many blogs I read. Otherwise I wouldn't read them!
Some I read for the humor, some I read for the information, others because they are so darn interesting.
I consider some of the bloggers on here as *friends*. I have actually met a few of them in real life.
I read more than I have listed, as I sometimes blog bounce from one listed blog to one they have listed, etc.
I won't choose sides. I'll just keep on reading what I enjoy.
So, for pitys' sake, Grow the hell up!

The Kids Are Alright....

Took a few pictures this morning!

Some of you may remember Opal, Otis' sister.
Don't worry, Opal is alive and well.
But no longer living in the barnyard!

Opals' mama, Nikki, stopped feeding her, wouldn't snuggle her to keep her warm, and in fact, kicked the poor wee kid away. So, I brought her in the house. My younger son is raising her and she is a demanding kid! Bottle feedings round the clock to get her weight up. Keeping her snuggled and warm while she sleeps.
Opal is our little Princess Opal now!
Still waiting on Champagne to kid. I hope it won't be too much longer!
Posted by Lamb at 2:19 PM 1 comment: